Office Space Planning: How To Achieve The Balance Between Collaborative and Private Spaces

One of the single biggest changes in office space planning over the last 30 years has been the shift away from rigid structures or cubicle offices, towards the modern day open plan office. Yet, despite being hailed as the future of the workplace and promoted a way to improve collaboration, many now consider the experiment to be a failure.

Common criticisms of the open plan office are that they are distracting, therefore hindering workplace productivity, and are stressful, impacting upon overall employee welfare. Nevertheless, the need for collaboration at work has never been greater, so how can you achieve the balance between collaborative and private spaces? 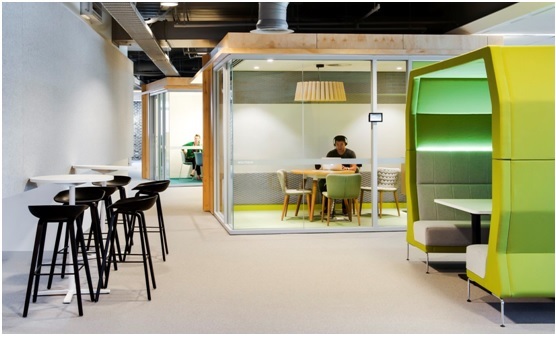 Although the backlash against open plan offices is a relatively new phenomenon, research has provided warning signs for decades. As far back as the 1980s, a Harvard Business Review study found that 85 percent of workers said they needed places to concentrate without distraction, with more than half saying their workplace lacked such places.

Despite this, many designers went ‘all in’ on the open plan experiment during the 1990s and have only recently seen the problems. A 2009 Swedish study, published in the Journal of Architectural and Planning Research, found that employees in private offices were the happiest, while those in large open offices registered the most dissatisfaction.

Meanwhile, a separate piece of research from the same year, published in the Asia-Pacific Journal of Health Management, found that 90 percent of all studies into open plan offices linked them with health problems like heightened stress and increased blood pressure, as noise and distractions take their toll.

“Open plan office workers also have other irritations to put up with,” says William Kremer, writing for the BBC World Service. “There is the shortage of daylight [and] ongoing squabbles with colleagues, over the air conditioning (on or off?) the blinds (up or down), food at the desk, the telephone ring tone…”

While the problems with the open plan office are very real, so are the problems it was designed to address in the first place. The cubicle design, which was so popular in the United States during the 1980s and early 1990s, has been shown time and time again to limit collaboration between employees.

As such, this means the aim of the open plan office was absolutely right, but the results it produced were not. So the modern day challenge for businesses and the commercial interior designers they work with is to balance collaboration and privacy, giving employees the choice of when to withdraw and when to collaborate.

One of the most effective ways to do this is to create dedicated collaborative and private areas. Ideally, the collaborative spaces should be relaxed, provide access to chargers for phones and tablets, and should encourage small groups to come together and form ideas. Meanwhile, private space should afford employees genuine privacy. This means protection from noise, an absence of visual distractions and a territory that is just for them.

“Only 55 percent of the workers we surveyed said they are able to work in groups without being interrupted [and] less than half say they can choose where they want to work within the office on the basis of the task at hand,” the Harvard Business Review conclude in their feature, Balancing “We” and “Me”.

In order to create the necessary balance, interior designers must provide employees with spaces to work collaboratively or privately, depending on the nature of the task and their mood at the time. Employers, meanwhile, must move towards affording staff members the freedom to decide what is best for them at any one particular time.